Man Kun: We are deeply moved by such a person

There is always a voice that reverberates in the world for a long time; There are always some moments that are unforgettable and stick to the original intention to pass on the faith; There is always a figure that can not be forgotten, and it becomes the memory of Man Kun. He strives to live up to his youth, and is grateful and moved. In Man Kun, such a diligent and loyal person has emerged one touching story after another, giving us the power to move forward. Let's witness his style with reverence！ Guo Junli: This year is my 10th year with Man Kun

01  Ten years to sharpen a sword

Guo Junli, born in April 1990, is a Han nationality from Hengyang, Hunan Province. In July 2010, Guo Junli, who is loyal to PCB manufacturing industry, travelled thousands of miles from Hengyang to Jinggangshan Economic Development Zone with a dream. He is now the director of Man Kun Test Department. Guo Junli has always been demanding himself and the management team with a "rigorous, meticulous and realistic" working attitude. His 10 years of persistence in the key word "diligence" is enough to turn any suspicious eyes into affirmation. His key word "responsibility" does not depend on anyone, and his dedicated arm can also become a mainstay. His key word is "happy". He opens the windows of his family's heart one by one with his cheerfulness and optimism. He copies the mood of spring breeze, is busy testing products, is busy pasting sunshine, and constantly composes the most beautiful notes of life!

02  Be Conscientious And Do One's Best

When Guo Junli just took the post of FQC surface treatment engineer for post process testing in Man Kun, he actively participated in the production of each post since taking the post, made in-depth understanding and continuous verification of the key parameters and key points of each post, and accumulated a lot of important parameters of experience and key points, such as: parameters of different processes for electrical testing, carbon oil parameters, and process parameters for four wire low resistance operation of flying needle machine, AVI appearance scanning, automobile plate quality control, and parameters of OSP Bokai, Enyuan and Sinochem suppliers for surface treatment. Looking back to the summer of 2010, when Mankun Factory was in the initial stage of establishment, there were only a dozen people in the workshop production line at that time. Guo Junli and his colleagues transported one piece of equipment to the workshop with a manual forklift. From the previous process to the subsequent process, each workshop installed and debugged machines and equipment, and mastered the control of key points for the process parameters of each piece of equipment. I remember that when the new project was officially put into production for the first time, problems followed: problems with incoming materials, new employees not familiar with the products, new production lines not smooth, sorting out and improving the SOP documents, etc. Facing the pressure of delivery, Guo Junli gathered his colleagues in production, quality and process to solve the existing problems. One month later, we overcame the thorny problems faced by production, and finally passed the product audit, winning the recognition of customers. In the future, whenever he encountered problems, he used his lunch break to explore and learn. In one year, he was familiar with the operation of each post on the production line. In the face of the problems presented by the products, Guo Junli strictly controlled the product quality, insisted on summing up experience every day in his work, grew from experience, and gradually improved himself.

03 From engineer to supervisor, take every step well

It is understood that Guo Junli, who was promoted as a supervisor in 2018, remembered that once a product had to be shipped in an emergency. Without saying a word, he led the team to fight for 16 hours and finally finished the delivery at 3 a.m. Along the way, he always insisted on going to the workshop at 7:40 every day to start patrolling the working status of night shift staff, organizing staff to hold morning meetings, and for three years, he insisted on clearing the tail and settling the P every day to ensure the rapid operation of online boards. Do work summary and work planning every day. Open his notebook and see that there are all hard goods. Record the results of the items completed every day in detail. Tick √ on the notebook for the problems that have been solved. Note the problems that have not been solved before continuing to follow up. Then plan the key work for tomorrow.

In terms of team management, it is advocated that everyone should work steadily and live happily. When working, we should devote ourselves, work hard together, and work together to do a good job. In life, we are optimistic, cheerful, and kind. Our colleagues like to associate with him. He always adheres to the people-oriented principle. No matter who put forward the opinions and feedback, he will take them seriously. Employees should go all out to deal with the problems they need to solve. They should think for the employees from the bottom of their hearts. They should report the work assigned by the leaders with plan data and ideas verified in the operation process. Finally, they should listen to the leaders' opinions before deciding the next work arrangement. For ten years, Guo Junli has been sticking to the PCB position, being careful and doing a good job in testing every PCB. Next, he said he would continue to lead the team to break through the technical difficulties. He is not only careful and serious, but also strict with himself. During his tenure as supervisor, he also trained a group of excellent team leaders for the company. 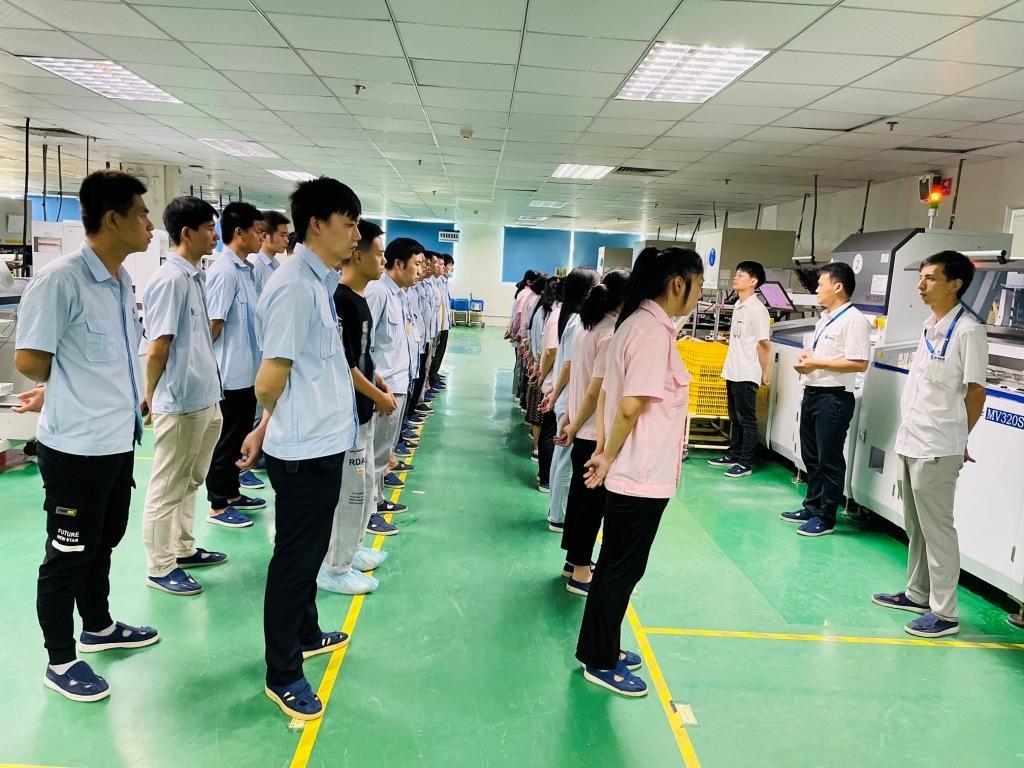 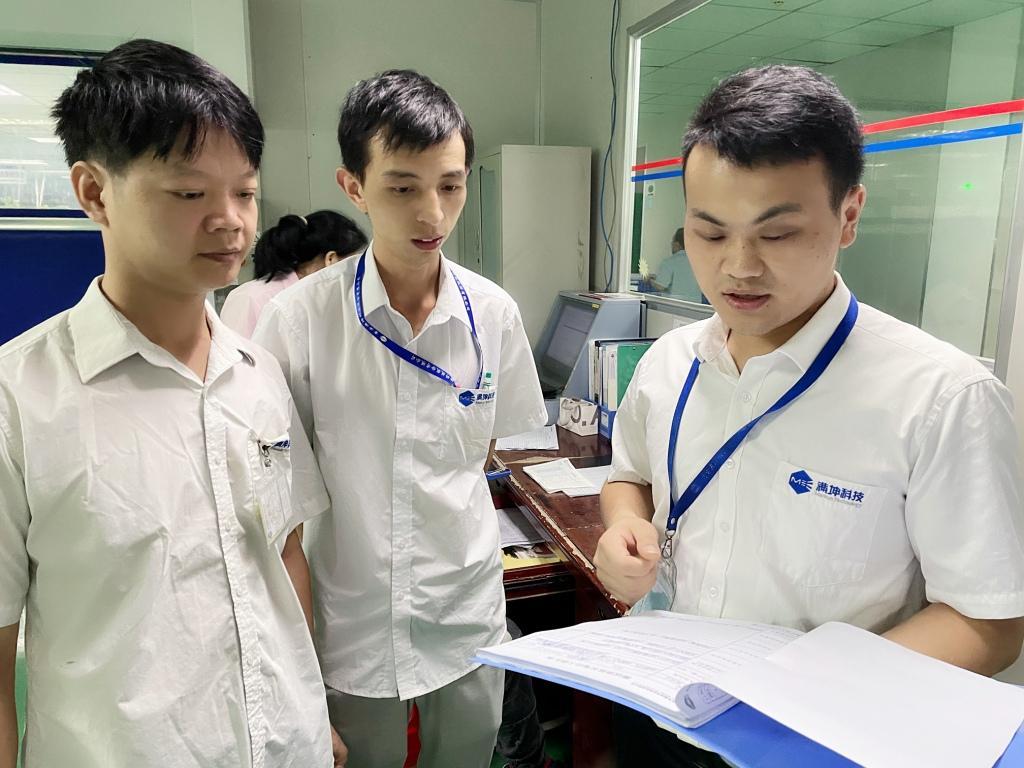 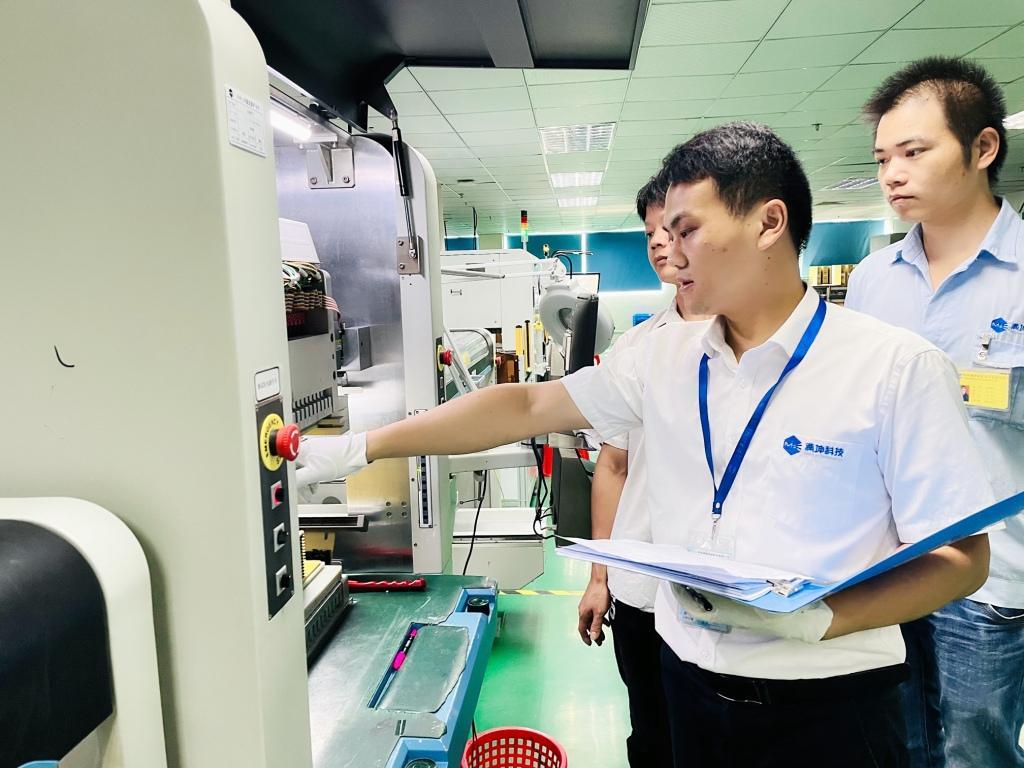 The picture shows the inspection equipment The picture shows the inspection product 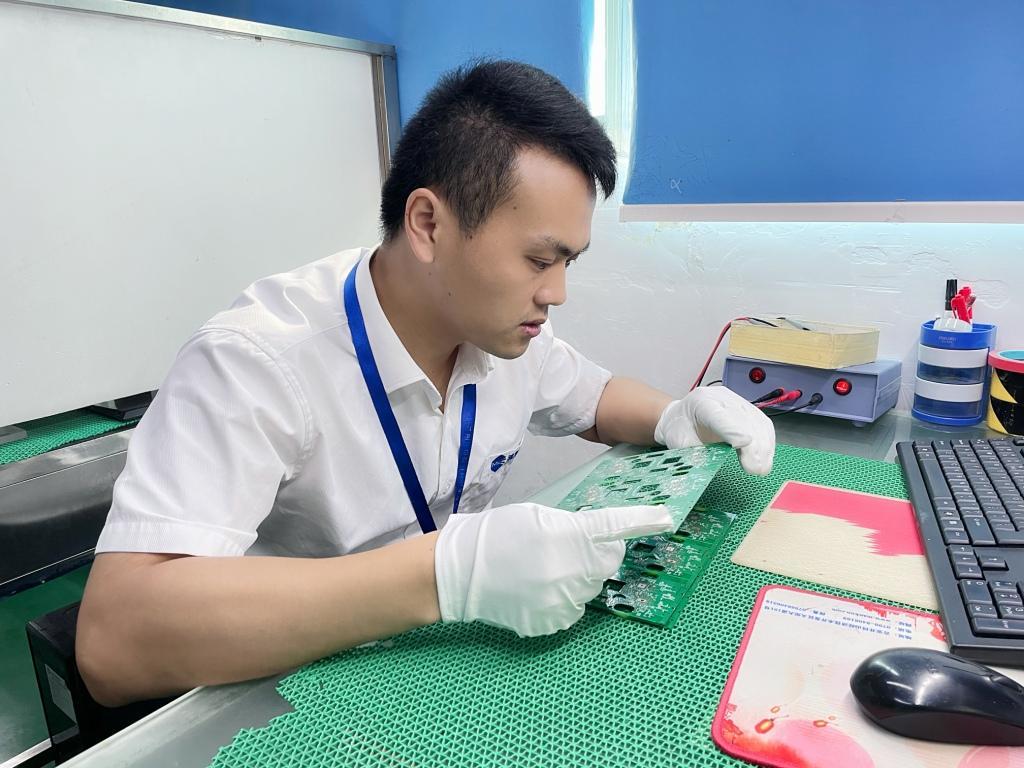 The figure shows the analysis and resolution of abnormal products

04  Persist because of love

He is an old man who never forgets his original intention. Since he joined Mankun in Ji'an in 2010, more than ten years have passed, and Guo Junli has always been fighting in the front line of management, production and service. His high sense of responsibility and active service not only continuously improve product quality and product quality, but also effectively mobilize the enthusiasm of workshop staff for work.

The maintenance of equipment, the improvement of product quality and product quality have always been Guo Junli's preoccupation. Guo Junli often said that product quality is the lifeblood of Man Kun people. As the department head, he has the responsibility to strictly control every link, not allow any slack, and be responsible for every customer. The most important thing for employees is to follow the process and never let a piece of unqualified PCB be sent out.

He insisted on implementing details every day, checking every process parameter, controlling the process of every board, and constantly improving and implementing. Because of the principle of quality first for a long time, our automotive products have been rated as A+suppliers by customers for three consecutive years.

Guo Junli believes that his ten years in the company has made him a better person. He said he would like to continue to go with the company in the next 10 years! He will continue to lead the team to break through technical difficulties and cultivate excellent teams for the company.

With a grateful heart, he worked hard and made silent contributions, and went through 10 years with the company. From the initial construction of Man Kun in Ji'an to the foundation laying of the current Phase III plant, he witnessed that the company has become one of the key enterprises cultivated by the government from its initial difficulties. He said that he was honored to participate in the whole development process of the company. How much sweat and hardship he had, and how many touching stories he cherished. He worked hard and devoted himself to the cause of Man Kun. Ten years of dedication, ten years of years, ten years of accumulation, the pillar of the enterprise who has worked hard for more than ten years. He has gained a lot, and won the honorary titles of "Employee Loyalty Award" and "Excellent Middle Management" for 10 years。 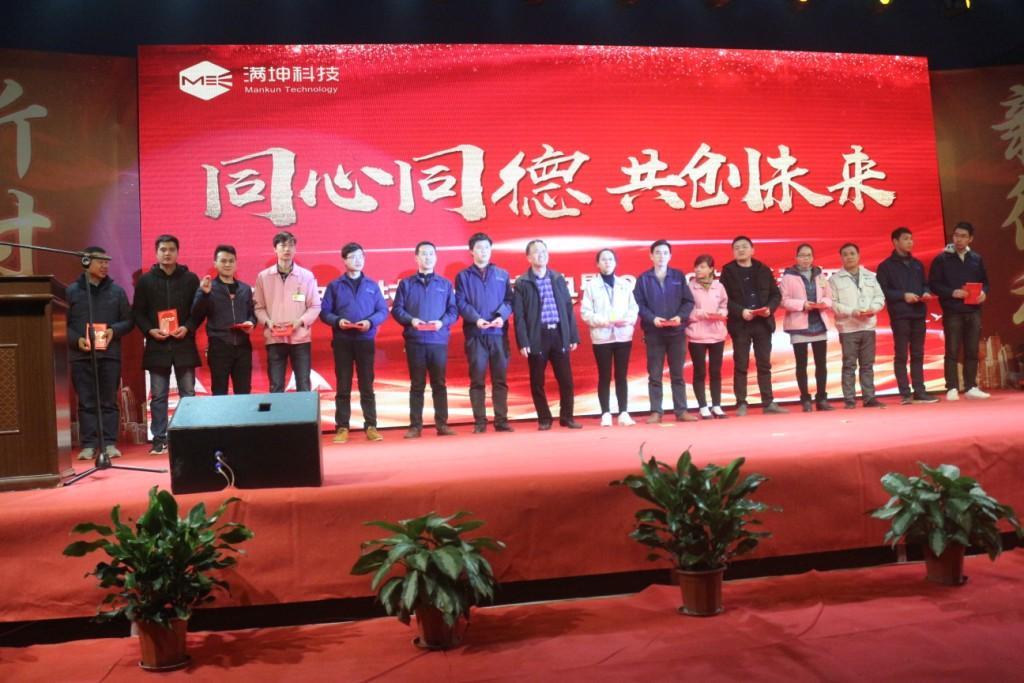 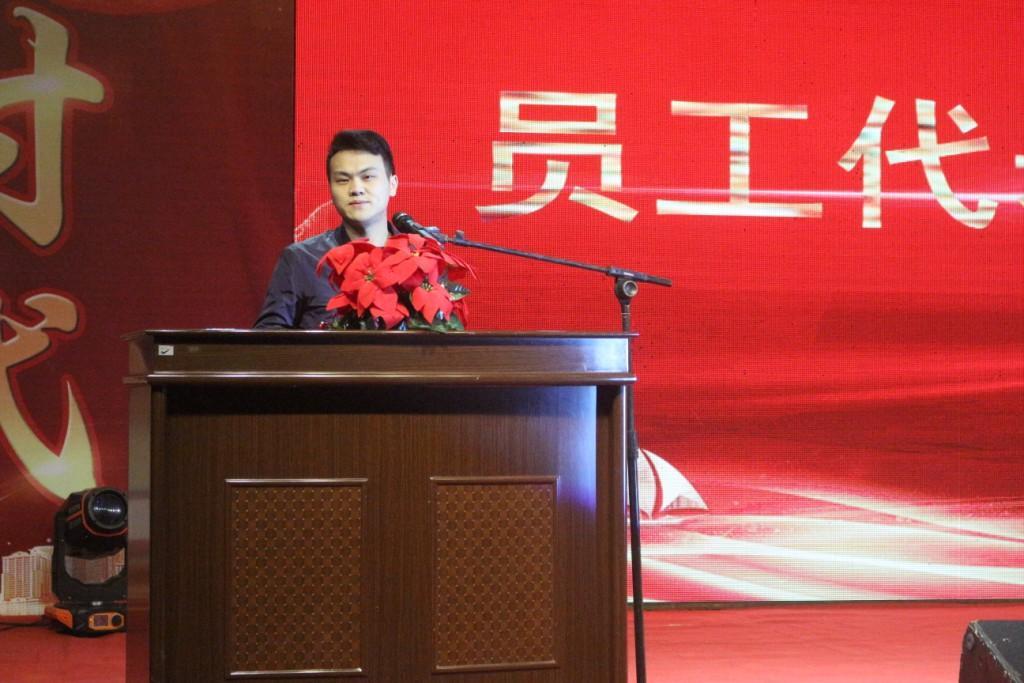 Guo Junli was elected as the employee representative to speak 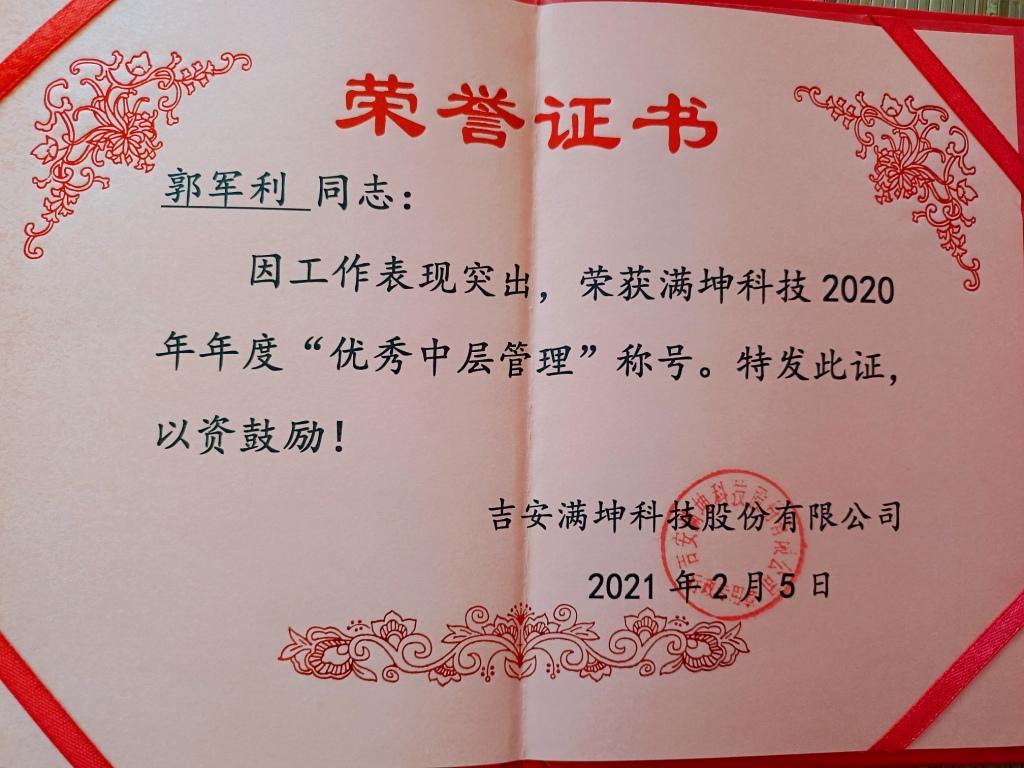 Won the title of excellent middle management in February 2021

At the end, with great respect, I would like to express my respect for the old employees of the company with the following words:

It is you who have witnessed the company's progress from youth to maturity, from narrow paths to broad roads, and so many years of experience have made our company strong and strong. The rise of the company is inseparable from the old employees and seniors who work together to create. It was you who dug up this land with your hands, planted a ray of life for this ignorant bud, and kept watering, fertilizing, and guarding around it day and night. For ten years, you have dedicated your youth and hard work to this seedling of hope. With your careful care, this seed has grown from a young seedling to a big tree.
Now, the trees are green and luxuriant, and they have their own place in this vast land.
Dashu knows that your blood and sweat are flowing in his body,
Dashu knew that it was you who bought your youthful life,
Dashu knows that he is grateful.

Dashu is willing to spend the remaining time with you through all the spring, summer, autumn and winter.

Read the story of Man Kun,

We will continue to walk together in the next decade！